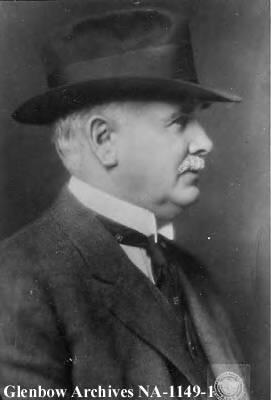 Patrick Burns, 1856-1937, was born in Oshawa, Ontario, son of Michael Byrne and Bridget Gibson Byrne. With little formal schooling, he set out for Manitoba and homesteaded near Minnedosa in 1878. He began to freight goods from Winnipeg and trail neighbours' cattle to the Winnipeg market. By 1885 he was buying cattle full-time, and in 1886 he got his first supply contract. His business grew with the railway boom and he expanded into ranching, packing, and the retail meat trade. In 1890 he settled in Calgary, Alberta and built an abattoir, supplying beef from his own ranches. He expanded into British Columbia in 1895. He bought out his British Columbia partner in 1901 and built a large plant and abattoir in Vancouver. He married Eileen Ellis, 1873-1923, of Penticton in 1901, and they had one son, Thomas Michael, 1906-1936.

Many of Burns' ranches were sold in 1917 to finance his businesses but he later acquired others. He also invested in mining such as the Northern Syndicate Ltd., although these investments did not have great results. By First World War he was established internationally and had become one of Canada's most successful business people. He was one of the "Big Four", who founded the Calgary Stampede. He was chairman of Burns Co. Ltd., and president of P. Burns Ranches Ltd., P. Burns Holdings Ltd., P. Burns Agencies, Limited and Burns Foundation Ltd. In 1928 he sold his packing business but retained the ranches including Bow Valley, C.K., Ricardo, Circle, Walrond, Bradfield, Lineham, Glengarry (44), Bar U, Flying E., 76, Two Dot and Rio Alto. Burns became a senator in 1931 and died in Calgary.

M's should be amalgamated. The Metis scrip samples are in M 2376, originals in vault.