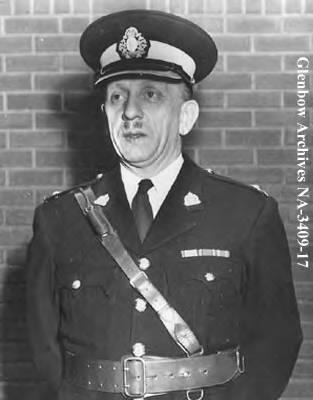 William Ettershank Buchanan, 1897-1974, was born in Glasgow, Scotland, came to Canada in 1912, and worked for the Edmonton Journal from 1913 to 1915. He joined the Royal North-West Mounted Police (RNWMP) in 1916 and was posted to Prince Albert, Saskatchewan and Edmonton. He enlisted in the Canadian Field Artillery in 1918 and served in the UK. He joined the Alberta Provincial Police in 1919, and opened the first detachment at Smoky Lake, Alberta in 1920. He was a constable at Leduc from 1928-1933, and rejoined the Royal Canadian Mounted Police (RCMP) when the APP disbanded, serving in New Brunswick, Saskatoon and North Battleford. He also served in Calgary in 1935, around which time he was commissioned as a sub-inspector. He became an inspector in 1944. He retired to Calgary in 1951. He was dominion president of the RCMP Veterans Association in the early 1960s. He married Barbara Ellen Cromarty, 1898-ca. 1980, in 1921 and they had four children. Their son, William G., served as an RCMP superintendent in Winnipeg in the 1970s.

The fonds consists of Smoky Lake detachment diaries (1921-1928), a recorded interview with William E. about his career (1973), a scrapbook regarding his police career (ca. 1910s-1950s), list of APP members (1932), and programs, invitations, newsclippings and certificates. Also consists of photographs of RNWMP, APP and RCMP personnel and veterans at Winnipeg, Calgary, Lac La Biche, Regina, Fort Pitt, Edmonton and Fort Macleod (1875-1973).