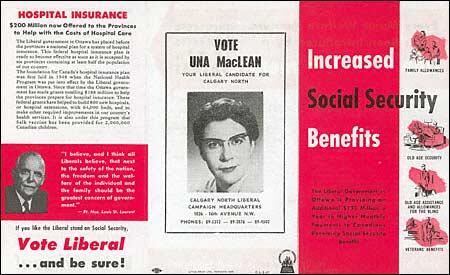 Una Maclean, 1926-2015, was born in Sunnynook, Alberta and educated there, at Central Collegiate Institute in Calgary, and at the University of Manitoba. She served with the Canadian Women's Army Corps in Winnipeg, 1944-1946. In Calgary she was employed by the Calgary Chamber of Commerce, 1950-1951, CKXL, 1951-1952, and as executive secretary of the southern branch of the Alberta Liberal Party, 1953-1957. From 1957 to 1962 she was a researcher for the Glenbow Foundation. She was extremely active in the Liberal Party. She was president of the Alberta Young Liberal Association 1953-1955, secretary of the Young Liberal Federation of Canada, 1956-1959, president of the Alberta Women's Liberal Association, 1958-1960, and vice-president of the Liberal Association of Alberta, 1967-1969. From 1987 to 1989 she served as president of the Liberal Party of Canada in Alberta. She ran, unsuccessfully, as a Liberal candidate in four federal elections: 1957, 1972, 1974 and 1988. She was also very active in the Canadian Federation of Business and Professional Women's Clubs, serving as president of both the national and Calgary groups. She was a City of Edmonton alderman for three terms, from 1966 to 1974. From 1977 to 1985 she was a Judge of the Court of Canadian Citizenship for Northern Alberta and Northeastern British Columbia. She married Art Evans, 1919-1993, an Edmonton journalist, and they had three children, William Maclean, Margaret G., and Sarah K.

Una Maclean Evans records as an Edmonton alderman are held by the City of Edmonton Archives.