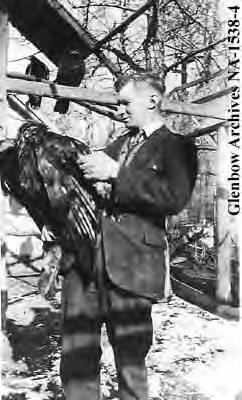 Thomas R. Baines, 1901-1994 , was born in England and came to Canada in 1926. In 1929 he was appointed first zookeeper and curator of the Calgary Zoo, a position he held for 35 years, with the exception of a period of military service in Italy during the Second World War. In 1961 he became the first Canadian president of the American Association of Zoological Parks. He was the also the first Canadian to be elected a member of the International Union of Zoo Directors.

He retired in 1964 but continued to travel extensively collecting natural artifacts and touring zoos and museums. In 1968 he became the Glenbow Museum's volunteer community visitor, presenting programs at nursing homes, scout meetings and schools. He received the Life Commitment Award of the Alberta Museums Association in 1989. Tom Baines School in Calgary was named in his honour in 1997. He never married.

The fonds consists of notebooks, personal correspondence, a transcript and recorded of interviews about his life, sound recordings of his presentations to school children, broadcasts from the Calgary Zoo, newsclippings, share certificates, records and souvenirs of his military service, a brief history of the early Calgary Parks Department, and notes regarding the Calgary Public Museum. Includes photographs of Calgary, St. George's Island and the zoo, and a slide of Billy Henry's 100th birthday.