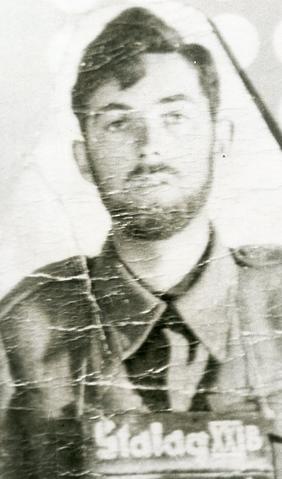 Ronald Stanley Holcroft was born in Wolverhampton, UK on November 15, 1916. Prior to enlistment in WWII, Holcroft studied economics at Cambridge University and also studied acting. During WWII he served as a member of the military police for the British Army. He was captured in 1940 during the evacuation of Dunkirk and spent the rest of the war at various German prisoner of war camps, including Stalag VIIIB. After the war Holcroft studied agriculture and emigrated to Canada in 1953. After a brief career working in agriculture in Brampton, Ontario he worked as a teacher in various locations in southern Ontario. Ronald Holcroft died on August 4, 2015 in Saltspring Island, B.C..

Items were kept by Ronald Holcroft as keepsakes from time spent in Stalag VIIIB during the years 1940-1945. They were passed on to his daughter (the donor) following his death in 2015. The unpublished biography of Holcroft was written by donor in 2014 based on interviews with Holcroft.

Fonds consists of records kept by Ronald Holcroft as keepsakes of his time spent at Stalag VIIIB (later Stalag-344) near Lamsdorf, Germany during WWII. Fonds also includes an unpublished memoir of his war experience written in 2014 with the help of his daughter.

The Prisoner's Progress, by Leslie G. Hunt (Hutchinson, 1941) was part of 2019.21 accession and has been catalogued into the general collection at The Military Museums Library and Archive. The copy bore no annotations or other marks of ownership.

This AtoM record was created by Jason Nisenson, November 2016.