Consists of:
one spoon stamped "R.H." and with engraving on front of handle "R.H. & J.B." Spoon was used by Holcroft at Stalag VIIIB and presumably shared with another prisoner with the initials J.B..
Uniform insignia related to Holcroft's service.

Consists of correspondence sent by Holcroft from the stations of his service during WWII and then from Stalag VIIIB to his family in England. Also includes three letters received by Holcroft while at Stalag VIIIB.

Consists of pages 25-91 of an unpublished account of Holcroft's wartime experience. Pages 1-24, not donated, pertain to his life before the war. Later accession also includes poetry written during and after POW internment, school assignments, and a short biographical essay.

Consists of two photographs. One, a copy of the original, shows Holcroft just after his time of capture in 1940. It was stolen from the offices of Stalag XXIB by a fellow inmate and brought back to England by Holcroft in 1945. The other shows Stalag VIIIB choir for the year 1942-43. Holcroft is not present though was active in the choir. 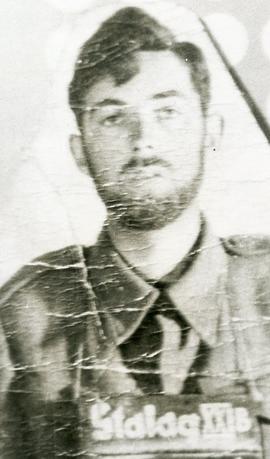 Fonds consists of records kept by Ronald Holcroft as keepsakes of his time spent at Stalag VIIIB (later Stalag-344) near Lamsdorf, Germany during WWII. Fonds also includes an unpublished memoir of his war experience written in 2014 with the help of his daughter.