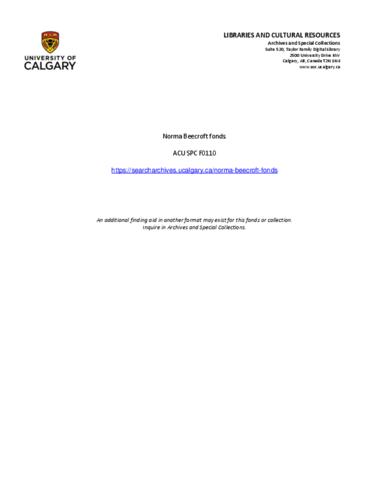 6.21 m of textual records and other materials.

Fonds consists of correspondence; manuscripts, ranging from notes and sketches to full scores, of orchestral, chamber and choral music as well as manuscripts of lectures and radio scripts about various Canadian composers; material about N. Beecroft and her career including items from her early education, newsclippings, articles, brochures and programmes; sound recordings of compositions by N. Beecroft, as well as of interviews, documentaries and tapes produced by Norma Beecroft Sound Inc. including master tapes for several Stratford Festival productions; videocassettes from the National Choreographic Seminar at the Banff Centre, Banff, Alberta, 1980; correspondence, financial records and other material relating to Beecroft/Maki Productions and to various music programs such as Ten Centuries Programs, Music of Today and Passage of the 20th Century, with which N. Beecroft was associated, particularly at CJRT-FM Radio, Toronto, Ontario; proposals, conferences, committees and workshops in which N. Beecroft was involved; material relating to Norma Beecroft Sound Inc.; and other miscellaneous material.