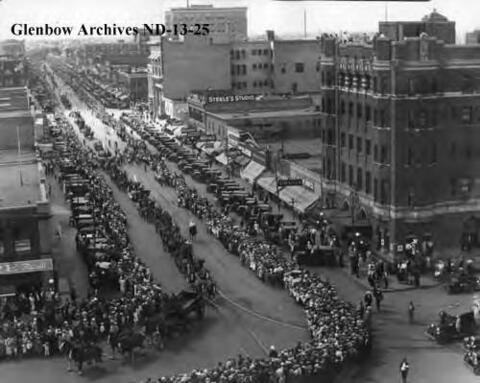 John William Gibson, 1872-1959, was born in Logan, Harrison County, Iowa, USA. He left home while he was still young and tried a number of different occupations working his way down to New Orleans, Louisiana. In 1890 he lost his left hand in a railway accident. By 1904 he was proprietor of the Gibson Advertising and Distributing agency in St. Paul, Minnesota and later that year he moved to Winnipeg, Manitoba.

Through the influence of the prominent photographer, Lewis B. Foote, he began taking photographs. He also worked as a real estate agent. In 1906 he became a commercial photographer, selling Winnipeg street scenes to postcard companies as well as freelancing for the Manitoba Free Press. In 1908 he formed a short-lived partnership with H.J. Metcalfe. By 1913 John W. had his own studio but by 1917 it was not doing well so he became an employee of Brigden's which provided fashion illustration and photography for Eaton's catalogues. From 1918 to ca. 1924 John W. went freelance and travelled around Saskatchewan and Alberta photographing church and school groups, threshing crews and agricultural organizations. From 1918 to 1920 and in 1924 he also worked for Turner Studio (later Capitol Studio) in Regina.

He married Martha Clorinda "Queenie" Priester, 1898-?, and they had two sons, Sheldon and Murray. John W. formed Gibson Studio in 1921 (called The Western Studio in 1922) but it folded by 1923. He also worked at Townsend Studio Co. in 1923. In 1925 he and his family moved to Saskatoon and set up a studio at 650 Broadway Avenue specializing in commercial and portrait photography. He also took photos in rural areas. To augment their income during the Depression, Queenie and the boys did amateur photofinishing. Murray joined the firm in 1945, and by 1952 he and Queenie formed a partnership as John W. was in failing health. The studio expanded into photo supplies and moved away from photofinishing.

These are nitrate negatives.