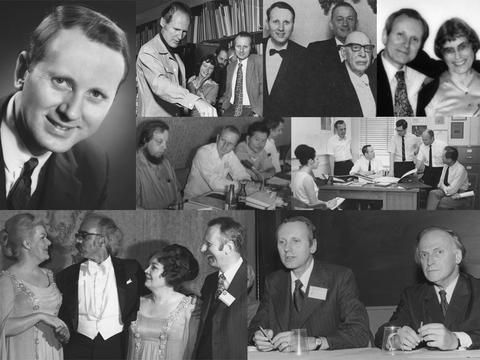 John (Peter Lee) Roberts, administrator, cultural policy advisor and scholar related to serious (art) music in Canada, was born 21 October 1930 in Sydney, Australia and became a naturalized Canadian in 1961. After studying piano at the New South Wales State Conservatory of Music in Sydney and voice in London he settled in Canada in 1955. He obtained his MA in Canadian studies from Carleton University in 1988.
His distinguished career in Canadian music programming, began with CBC Winnipeg where he was a music producer from 1955-1957. There, he became closely associated with Winnipeg composer, pianist, and violinist Sophie Carmen Eckhardt-Gramatté and her husband, Dr. Ferdinand Eckhardt.
His career at the CBC quickly evolved to positions of leadership and greater reach. He was Program Organizer 1957-1965 and Supervisor of Radio Music 1965-1971 at CBC Toronto, Head of Radio Music and Variety 1971-1975 for the English Services Division (ESD), and Special Adviser in Music and Arts Development 1976-1977.
Roberts is credited with developing CBC music festivals which provided exposure to Canadian performers and composers in cities across Canada through performances. Building on these, he established an extensive program of commissions for Canadian composers. He also developed and held CBC talent competitions which have discovered outstanding young Canadian artists and launched important performers and composers on major careers.
Roberts encouraged education on music subjects through radio documentaries on composers and musicians and supported in early commissions of documentaries in the 1960s by Glenn Gould and others. Roberts made the CBC a major producer of art music recordings in Canada through his establishment of a separate recording division which produced the CBC's SM (serious music) series and the Canadian Collection. He also encouraged the development of a CBC distribution system which included commercial sales to a wider Canadian audience through mail order.
Roberts is also credited with bringing Igor Stravinsky to Canada in the early 1960s, which resulted in premier performances and recordings of some of Stravinsky’s late works with the CBC in Toronto at Massey Hall.
While still at the CBC, he was president of the board of the Canadian Music Centre in 1971-1973. When he took the reigns as the operating manager, or director general, of the CMC from 1977-1981, he established the Centredisc label which became a primary vehicle for the recording of Canadian Music.
Roberts has been an active member of numerous arts and culture boards and key committees in Canada and abroad. Roberts was President of the Canadian Music Council, from 1968-1971 and 1975-1977, board member of the Canada Council for the Arts, president of the Les Jeunesses Musicales du Canada, and co-founder of the Esprit Orchestra in Toronto and co-founder in 1984 of the Toronto International Festival. In Calgary, he served on the board of Honens Piano Competition in the early 2000s.
Roberts’s expertise has been utilized on the international level to chair the organization of several international contemporary music festivals and to act as an advisor on broadcasting and communications development in Europe, Africa, Asia and Australia. Roberts was the first chairman 1969-70 of the Radio and Commercial Recording Group of the International Music Centre (IMZ), Vienna, an organization of representatives from broadcasting, recording, film, operatic and other organizations. In Vienna as well, he was vice-president in 1976 of the International Institute for Music, Dance and Theatre in the Audio-Visual Media (MEDIACULT). He also served on the Canadian Commission for UNESCO. In 1973 he became the first Canadian to be elected to the executive of the International Music Council, which he served 1975-1976 as vice-president and 1978-1979 as president, succeeding Yehudi Menuhin. When Canada was host in 1975 to the 16th IMC general assembly, Roberts was the chief planner of the concurrent first World Music Week. He was the organizer 1975-1977 (and chairman 1975-83) of International Music Day.
Roberts was a close colleague and life-long friend of Canadian pianist, Glenn Gould and eulogized him after his sudden death in 1982. Roberts ensured that Gould’s papers were deposited with the Library and Archives Canada and he was the first to publish selected letters of the artist. Roberts is also the Founding President of The Glenn Gould Foundation (1982) which established the prestigious $50,000 Glenn Gould Prize in the area of music and communications.
In the 1980s, he pursued his interest in cultural policy research and development in earnest. He took on a post as senior advisor to the Canadian Radio and Television Commissions (CRTC), working under the chair, John Meisel from 1981-1983. In 1983-1987 he was senior adviser, cultural development for the CBC, at its head office in Ottawa.
In 1986, John Roberts moved into academia, when he became an Adjunct professor and then Dean of Fine Arts at the University of Calgary in 1987, a post he held until his retirement in 1995. At the University of Calgary, he was responsible for the building of the Rosza Centre, the University of Calgary’s music and concert centre, and he also founded another new but short lived record label – Unical. During 1995-1996 he was the first Seagram Visiting Fellow in the McGill Institute for the Study of Canada at McGill University. He has a distinguished record as a lecturer and published writer in Canada and Europe in the fields of music and communications in the electronic media as well as cultural policy.
John Roberts is the recipient of numerous awards and honours for his service to contemporary art music in Canada and internationally. In 1972, the Canadian League of Composers honoured Roberts with a special award for service to Canadian music. In 1978 Roberts received the Queen's Silver Jubilee Medal and in 1981 the Cross of Honour for Science and the Arts from Austria. Also in 1981 he was made a Member of the Order of Canada. He received two honorary Doctorates, from the University of Victoria (1992) and the University of Manitoba (1996). In 1996 he was made an Officer of the Order of Canada.

There are no restrictions on access for study and research. Requests for reproduction of material for publication and other dissemination may directed to speccoll@ucalgary.ca Archives and Special Collections, University of Calgary.

For a selection of digitized documents see here: http://contentdm.ucalgary.ca/cdm/landingpage/collection/jpr