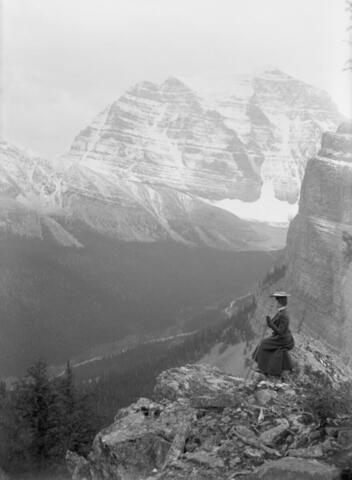 Herbert Wendell Gleason, 1855-1937, was born in Malden, Massachusetts, USA. He attended Williams College and Union and Andover Seminaries, and became a Congregational minister in 1883. He married Lulu Rounds in that same year. From 1885-1888 he was a minister in Minneapolis, Minnesota but then resigned to become the editor of The Kingdom, a religious publication. He began his photography career in 1899 and travelled for months at a time to take wilderness photographs in remote areas of Yellowstone Park and Alaska, California, and other American states. He also visited Canada many times, including a visit to Calgary, Alberta in 1905, and was particularly interested in photographing the mountains and glaciers of British Columbia. Lulu often accompanied him and hand-coloured his lantern slides which he would then present on lecture tours promoting conservation of North America's wilderness. At one point in his career he was appointed an Interior Department Inspector for the US government, photographing and observing national parks and lands proposed for national park status. For further information see Taking Sides with the Sun: landscape photographer Herbert W. Gleason: a biography / Dale R. Schwie. - Minneapolis: Nodin Press, 2017.

After Herbert's death the negatives disappeared until 1948 when Roland Robbins discovered them in the possession of a Boston photographic firm and acquired them.

The fonds consists of photographs of mountains and glaciers in British Columbia national parks (1905-1914); and photographs of Calgary and Medicine Hat (1905), the prairies, Ontario and of Herbert. Includes an interview with the donor, Roland Robbins, regarding the photographs.

The American portion of this fonds is held by the Concord Free Public Library, Concord, Massachusetts.

Glenbow mounted an exhibition of Gleason photographs entitled Writing with Light, the western impressions of Herbert Wendell Gleason, from October 1981 to January 1982.