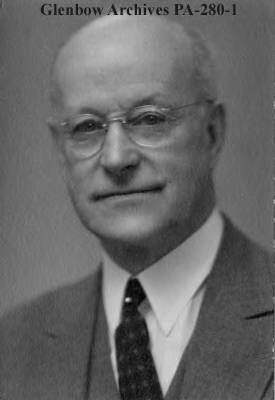 George Ray Johnson, 1877-1956, was born in Welsford, New Brunswick. He received his BA in 1898 from Mount Allison Academy, spent one year at the College of Physicians and Surgeons in Baltimore, and interned at McGill where he received his Doctor of Medicine and Master of Surgery in 1902. Between 1903 and 1905 he served as a ship's surgeon. He then surveyed for a railroad in northern Ontario before becoming a surgeon on the Canadian National Railway, 1912-1914. At the outbreak of First World War, he enlisted in the Royal Canadian Army Medical Corps and served overseas, 1915-1918.

After the war he was appointed Medical Director in Calgary for the Department of Soldiers' Civil Re-Establishment, 1918-1928. He received his MD from the University of Alberta in 1923 and served as Registrar for the College of Physicians and Surgeons of Alberta, 1922-1944. From 1928 to 1954 he was the Chief Coroner for the City of Calgary. His interests included geology, western and medical history, and archaeology. He served as president of the Ranchmen's Club, 1935-1937, and as vice-president of the Calgary Zoological Society in the 1950s. He and his wife, Alice Bell, ?-1965, had one son, George R. Jr.

The fonds consists of personal papers and photographs; records pertaining to his career as a doctor: correspondence, medical diary (1905), journals, calendars, an autobiography of Dr. E.A. Braithwaite, biographical data on various doctors, photographs and medical certificates; a Second World War trench map; correspondence as medical director of the Department of Soldiers' Civil Re-Establishment; and correspondence as vice president of the Calgary Zoological Society.

There is an interview with Alice in the Sheilagh Jameson fonds at Glenbow (M-8119-183).