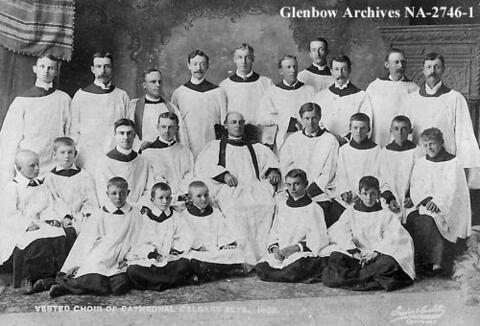 David John Carter, 1934- , was born in Moose Jaw, Saskatchewan and educated at the University of Manitoba, St. John's College (Winnipeg), and the Anglican Theological College of British Columbia. He served as chaplain at the University of Calgary, Mount Royal College, and Southern Alberta Institute of Technology (SAIT); as rector and dean of the Cathedral Church of the Redeemer in Calgary, 1969-1979; and was archivist for the Anglican Diocese of Calgary, 1966-1988. He was employed by Foothills Pipeline Yukon and Nova Corporation, 1979-1986. Rev. Carter was first elected to the Alberta Legislature in 1979 as a Conservative member and was re-elected in 1982, 1986 and 1989. He was speaker of the Alberta Legislature, 1986-1993. He was on the Senate of the University of Calgary, 1971-1977, a director of the Trinity Place Foundation in 1975 and director of the Calgary Exhibition and Stampede, 1986-1990. He published Behind Canadian Barbed Wire : Alien, Refugee and Prisoner of War Camps in Canada, 1914-1946. - Calgary : Tumbleweed Press, 1980; Samuel Trivett : Missionary with the Blood Indians or What's a Nice Boy Like You Doing in a Place Like This? - Calgary : Kyle Printing and Stationery, 1974; and a number of other publications. For further information see "David John Carter, 1986-1993" in A Higher Duty : Speakers of the Legislative Assemblies of the North-West Territories and Alberta, 1888-2005 / Sandra E. Perry and Valerie L. Footz. -- Edmonton : Legislative Assembly of Alberta, 2006, p. 399-420.

The fonds consists of personal records related to his training and service as Anglican clergy and as Member of the Legislative Assembly (MLA); and research notes and drafts of his publications.

Other David Carter records are held by the Medicine Hat Museum and Archives.
See also the David Carter fonds at the University of Calgary Archives.

Link added to Archives Photographs on May 8, 2018.