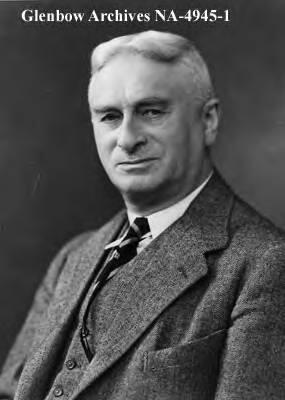 Charles Walter Peterson, 1868-1944, was born in Copenhagen, Denmark, and emigrated to Manitoba in 1888. After a failed attempt at homesteading, he was appointed the assistant general immigration and colonization agent for the Manitoba Northwest Railroad. In 1897 he became the deputy minister of agriculture for the North-West Territories. In 1905 he founded the Farm and Ranch Review in Calgary with Malcolm Geddes. The following year he became Canadian Pacific Railway's (CPR) general manager of immigration and colonization, and from 1910 to 1912 served as superintendent of irrigation. He resigned from CPR in 1912 to devote himself full time editing the Farm and Ranch Review. He was also the president of Western Printing and Lithographing Company. In 1893 he married Helen Mary Edge and in 1907 Elizabeth Winnifred Watson. They had two children, Patrick, ca. 1911-1999 and Dagny. He later married Else Heidelberg, 1900-1999, of Denmark in 1926 and they had two children, William S. and Anne-Marie. For more biographical information see David C. Jones' article, "C.W. Peterson : Ruminations of a Rustic" in Citymakers : Calgarians after the Frontier / Max Foran and Sheilagh S. Jameson, eds. - Calgary : Historical Society of Alberta, Chinook Country Chapter, 1987.