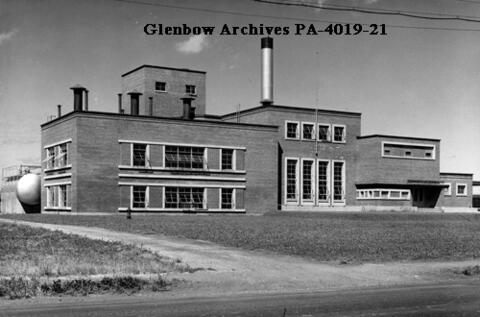 Joseph Garnet Bennett, 1882-1940, was born in England and came to Calgary, Alberta in 1910. In 1916 he formed a construction firm in partnership with William White. Joseph's sons, John Garnet Bennett, 1906-1987, and A. Gordon Bennett, 1908-1990, soon joined the firm. It was incorporated as Bennett and White Construction Ltd. in 1925. When White retired in 1932 Bennett's sons bought his shares, and in 1936 they took over active control of the company from their father. The firm opened a Vancouver office in 1936 and an Edmonton office in 1938. It has been involved in a wide variety of construction projects including public buildings, roads, grain elevators, bridges and dams. It was the contractor for the Glenmore Dam project in Calgary in the early 1930s. During the Second World War the firm constructed many of the facilities used by the British Commonwealth Air Training Plan. In the 1966 it was renamed Bennett and White Ltd. It was the 15th largest non-residential construction contractor in Canada in 1981. For further information see Calgary : Canada's Frontier Metropolis : An Illustrated History / Max Foran and Heather MacEwan Foran. -- Burlington : Windsor Publications, 1982, p. 284-285.

Material relating to the history of Bennett and White in British Columbia is in the Arthur S. Dawe fonds at Glenbow.

The records acquired in 1989 from A.G. Bennett were not accessioned until 1992.