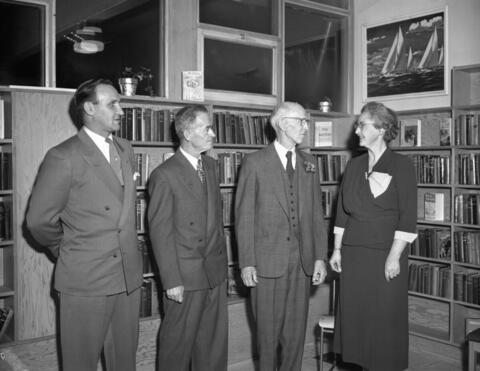 Alexander Calhoun, 1879-1979, was born in Fenelon Falls, Ontario and came to Calgary in 1911 after graduating from Queen's University. In 1911 he was appointed librarian for the Calgary Public Library, a position he held until his retirement in 1945. A founding member of many local organizations, he was awarded an honorary LLD degree from the University of Alberta and an honorary doctorate from the University of Calgary. The local Calhoun library was named after him. He was married to Vivian Moynes, ?-1958, and they had one son, John. For further information see Alexander Calhoun / Donna Lohnes and Barbara Nicholson. -- Calgary : Calgary Public Library, 1987; and Alexander Calhoun : The Life and Times of Calgary's First Librarian / Gloria A. Dingwall. -- University of Calgary : unpublished MA thesis, 1996.

The fonds consists of correspondence pertaining to his appointment as librarian, his article on the Calgary Public Library, a transcript of an interview with him, and an oral autobiography he recorded ca. 1975. Also includes interviews conducted by Donna Lohnes and Barbara Nicholson of three of Calhoun's associates, Aylmer Liesemer, Jim Pegg, and Kay Snow.