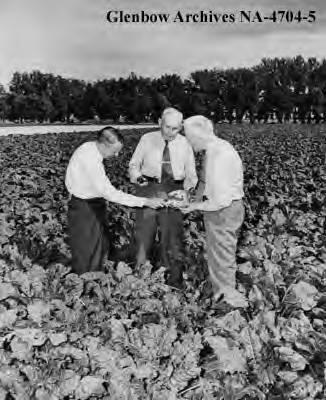 Asael Exile Palmer, 1888-1984, was born in Salt Lake City, Utah, USA. His family moved to Alberta in 1903 and homesteaded near Turin in 1909. He received his BSc in crops and soils at Utah State Agricultural College, and later obtained a second BSc from the University of Alberta. In 1921 he was appointed assistant superintendent of the Lethbridge Experimental Station. He became superintendent in 1945. He was a specialist in dry land farming and wrote many articles and books on irrigation, soil erosion, and water conservation. He was a life member of the Alberta Institute of Agrologists and the Agricultural Institute of Canada, and was actively involved in the Alberta Agricultural Research Trust and the Prairie Farm Rehabilitation Administration (PFRA). He was inducted into the Alberta Agriculture Hall of Fame in 1973. He was president of the Lethbridge Stake of the Mormon Church for twenty years. He married Maydell Cazier in 1916 and they had four children, A. Delbert, Camille (Hawkins), Eileen (Smith) and Byron C.

The diaries, notebooks and correspondence of Asael, Abraham and William Palmer (1839-1980) are held by the Genealogical Department of the Church of Jesus Christ of Latter-Day Saints, Salt Lake City, Utah. A microfilm copy is available at Glenbow. Two recorded interviews of A.E. Palmer are in the Irrigation Research Project at Glenbow (RCT-90-30 and RCT-90-31). Another interview is in the Charles Ursenbach Oral History Project at Glenbow (M-4211, file 10).

The LDS Church material is found on microfilm AB Palmer.