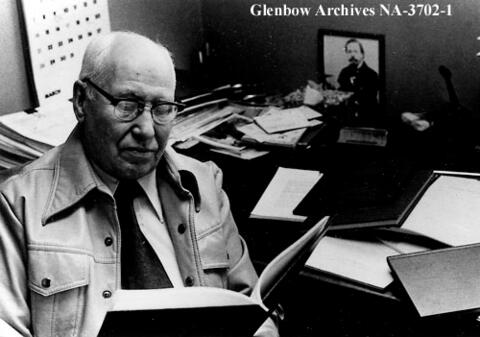 Charles Ursenbach, 1903-1985, was born in Idaho, USA, and came to Raymond, Alberta with his family in 1910. The family moved to Lethbridge in 1916. In 1921 he went to work for Ellison Mills, first in New Dayton, and later in Lethbridge. In 1925 he married M. Lucile Harvey, 1900-1999, and they had four children, Harvey, Lucile, Geraldine and Maureen. Ursenbach spent 1926 in Montreal on a Mormon mission before returning to Lethbridge. In 1927 the family moved to Calgary where Ursenbach began to work for the Alberta Wheat Pool. He worked for the Pool until 1948, then went into business for himself. He opened Canadian Quick-Freeze, a frozen food locker plant. He sold the business in 1957 and briefly worked in real estate before organizing a stage equipment business called Canadian Supply and Manufacturing. He sold the stage business in 1973 due to health problems.

In 1973, the Church of Jesus Christ of Latter-Day Saints asked Charles Ursenbach of Calgary to interview some old-timers and important leaders of the Mormon Church. The broader oral history project which he undertook over the next twelve years, including the Western Oral History Program, grew out of this. He initially wrote to the mayors of 280 southern Alberta communities and compiled a lengthy list of potential subjects. He then travelled throughout this area interviewing people. The recordings were later transcribed. A majority of the interviews are with Mormons, but he also interviewed other pioneers, former members of the Royal Canadian Mounted Police (RCMP), prominent citizens, etc. Before his death, he did over 300 interviews.

The fonds consists of an alphabetically-arranged set of files kept by Ursenbach, which relate to organizations in which he was involved (especially Mormon and oral history organizations); histories of various stakes and wards of the Church of Jesus Christ of Latter-Day Saints (CJCLDS); a small amount of businesss records related to Canadian Supply and Manufacturing Ltd. and Sunberta; Ursenbach family letters; Ursenbach's historical writings; and photographs of the family and Lethbridge area. The fonds also consists of extensive recorded interviews undertaken by Ursenbach with Mormons and other Albertans, transcripts of interviews, and some biographies and autobiographies donated by the families of those he contacted.

Ursenbach's diaries (1970-1985) are in the Harold B. Lee Library, Brigham Young University.