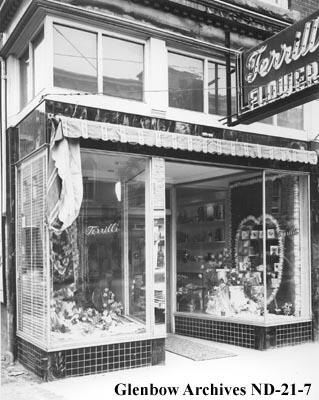 Terrill's Flowers Ltd. was established in Calgary, Alberta in 1902 by Alfred Marmaduke Terrill, a florist originally from Ontario. The business grew to include greenhouses, offices and salesrooms. Terrill retired in 1922 due to poor health, and W.H. Colley assumed management. In 1924, Colley and Carleton Huffman Kayler, 1897-1956, formed a partnership and acquired Terrill's interests in the business. Colley retired in 1946, and Kayler succeeded him as manager. When Kayler died, his wife, Margaret King (later Saucier), 1904-2005, took over the business. In 1972 Terrill's Flowers was purchased by Pederson Brothers.

Margaret's personal papers are in the Margaret Saucier fonds at Glenbow