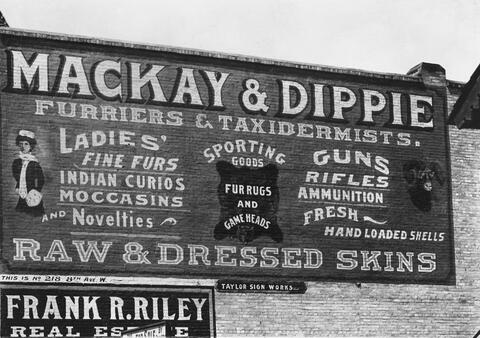 Taylor Sign Works was established in 1900 by George Lawton Taylor, an Englishman who had arrived in Calgary, Alberta in 1896. He and his wife had three children, Ernest, Elsie and Enid. The first workshop was above the Cooperative Store on 8th Avenue SE, next to the Burns Building. In about 1910 or 1911 the Taylors built a house at 505 - 8th Street SW, and the shop was moved to the back of the house. When G.L. Taylor retired in 1947 his son Ernest purchased the company. Bill Shaw and Lloyd Traptow, 1931-2014, began as sign painting apprentices with the firm in 1946 and 1947 respectively. They purchased the business from Ernie Taylor in 1968. The company was incorporated in 1973 under the name Taylor Signs Ltd. It specializes in hand-lettering, screen printing and sandblasted signs, for hotels, restaurants, theatres, stores and other businesses.

The fonds consists of designs and sketches, samples, pricelists, cashbook (photocopy only), photographs of signs and buildings, and catalogues. Includes some personal papers of George and Ernest Taylor.

The original cashbook is held by Lloyd Traptow.

The cashbook was photocopied in January 1996. The original is in the safe at Taylor Signs.