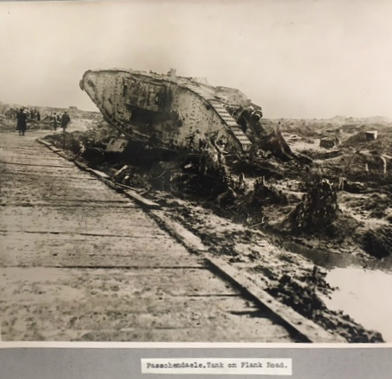 Roger Babineau lived the majority of his life in Strathmore, Alberta. He died there in 2017.

Album was formerly in the custody of Roger Babineau (1941-2017), the step-grandfather of the donor. Donor's children found the item in Babineau's home in Strathmore, AB following his death. No further provenance is known.

Consists of one photograph album containing official World War One photographs. Item was produced by the studio of F. Wade Moses, Montreal PQ, and likely sold as a set during and after the war.

Notable images include: aerial view of the first Vimy memorial at Thelus Corner ; aerial view of an advance during battle of the Somme ; Ypres Cloth Hall in stages of ruin ; views of German trench works.

Leather on pressboard binding is in poor condition, photographs and backing are in good condition.

This AtoM record was created by Jason Nisenson, June 2018