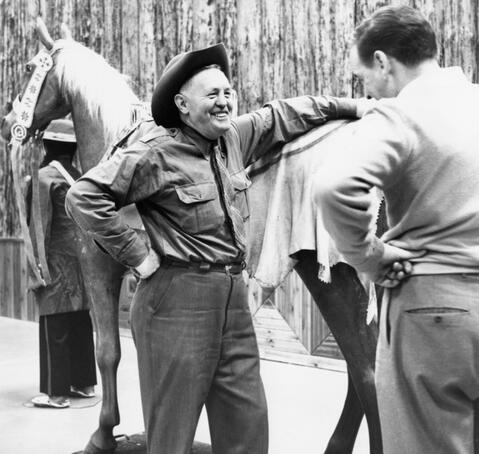 John George "Red" Cathcart, 1904-1973, was born in Gladstone, Manitoba. After service in the Princess Patricia's Canadian Light Infantry he worked as a cowboy in Saskatchewan and at the Clem Gardner and Jack Morton ranches in Alberta. Cathcart moved to Banff, Alberta in 1922 and became a packer for Pat Brewster and Jimmy Simpson. For a brief period he was a park warden. He then moved to Zeballos, British Columbia before serving in the Royal Canadian Army Service Corps in the Second World War.

He became curator of the Luxton Museum in 1953, and in 1959 came to Calgary to work as a supervisor and fieldworker for the Glenbow Foundation. He retired in 1969 but continued to work for Riveredge Foundation, another Harvie foundation, until 1973. Cathcart was married three times, first to Thelma Nadine Shilling, 1928-1983, second to Eunice Harding, and thirdly to Margaret Kelly Lewis, ?-2005. Margaret had one daughter, Eva May, from a previous marriage.

Transferred from Riveredge Foundation and Heritage Park, 1971-1978; and purchased from Aquila Books, 2003.

The fonds consists of correspondence regarding Luxton and Glenbow acquisitions and displays (1947-1969), and inventories of artifacts (1957-1966); and photographs, invoices, licences, calendars, articles and miscellany collected for Glenbow by Cathcart (1860-1969). Includes Cathcart's personal correspondence and notes (1931-1974), recorded interview about his life (including transcript), postcards, greeting cards, scrapbooks, newspaper clippings, photographs, a film and miscellany.

Title based on provenance and contents of records.

File 50 has been described separately as the T.Flett and Son fonds.