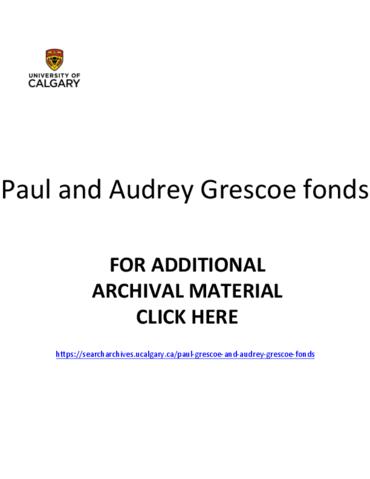 Paul Grescoe was born in Winnipeg in 1939 where he began his career with Canadian Press, later working for The Brandon Sun, The Winnipeg Tribune and The Toronto Telegram before becoming a staff writer and editor with The Canadian Magazine and Maclean's. He has written books on business (including The money rustlers, 1985; Jimmy, the autobiography of Jim Pattison, 1988; The mavericks: lessons learned from the west's winning entrepreneurs, 1999; Flight path: how Westjet is flying high in Canada's most turbulent industry, 2004; and Secret riches: adventures of an unreformed oilman, 2004); publishing (The merchants of Venus; inside Harlequin and the empire of romance, 1996, and 101 uses for this book, 1996); travel (Vancouver; visions of a city, 1993) ; and crime fiction (Blood vessel, 1993, and Flesh wound which won the Crime writers of Canada prize for best first novel in 1991). Audrey Grescoe (née Patterson) was born in Hamilton in 1939. She began her writing and editing career as a reporter for The Hamilton Spectator and as a copy editor at The Globe and Mail. While raising two children in Vancouver between the late 1960s and early 1980s, she wrote as a freelancer for Weekend Magazine, The Canadian Magazine, The Financial Post Magazine, Homemaker?s, Chatelaine, Reader?s Digest, The Imperial Oil Review, CityWoman, Vancouver Magazine and Vancouver Calendar Magazine. She was an associate editor of Western Living Magazine from 1984-1986. Between 1987 and 1991 she researched and wrote two book-length documents for David Strangway, president of the University of British Columbia (The President?s report on the creative and performing arts and The President?s report on British Columbia?s Centre of Teaching and Research in the Health Sciences). She edited Wayne Gretzky: The authorized pictorial biography by Jim Taylor, 1994 and wrote Giants: The colossal trees of Pacific North America, 1997. Between 1999 and 2008, she edited three cookbooks by Vancouver?s award-winning barbecue chef David Veljacic. As co-owners of Vancouver Magazine with lawyer Ron Stern and artists Iain and Ingrid Baxter, Paul and Audrey Grescoe founded Calgary and Edmonton Magazines and were the first editors of Calgary Magazine. They have collaborated on 5 books: Fragments of paradise, 1995; Alaska: the cruise lover's guide, 1998; The book of letters: 150 years of private Canadian correspondence, 2002; The book of war letters: 100 years of Canadian wartime correspondence, 2003; and The book of love letters, 2005. Paul and Audrey Grescoe were co-owners of Tribute Books, a publishing company in Vancouver and Toronto.

Fonds consists of research material relating to book The merchants of Venus: inside Harlequin and the empire of romance including Harlequin promotional material, photographs, interviews with various Harlequin executives and writers, articles on romance by other authors, notes and material relating to 1995 Romantic Times convention and issues of Pandora's Box, the newsletter of the Published Authors Network of Romance Writers of America (Acc 705/01.11). Acc 788/05.9 consists of correspondence, research material and manuscripts relating to other books by P. Grescoe and P. and A. Grescoe including Flesh wound, Blood vessel, Alaska: the cruise lover's guide, The book of letters, The book of war letters, Flight path, The mavericks and Secret riches. Includes copies of the published books. Acc 835/07.25 consists of material, mainly correspondence, relating to P. and A. Grescoe's The book of love letters; Canadian kinship, friendship, and romance (Toronto: McClelland & Stewart Ltd., 2005). Acc 863/09.7 primarily consists of material relating to books P. Grescoe wrote with Richard F. Haskayne: Northern tigers: building ethical Canadian corporate champions: a memoir and a manifesto (Toronto: Key Porter Books, 2007); Wayne Skene: Wheels: the legacy of Lloyd Cooper and his Calgary roller rink (Bowen Island: Tribute Books, 2007); Sean Rossiter: Safe and sound: the story of The Justice Institute of British Columbia (Bowen Island: Tribute Books, 2008); and Harley Hotchkiss: A life in the hockey rink, oil patch and community (Toronto: Dundurn Press, 2009).