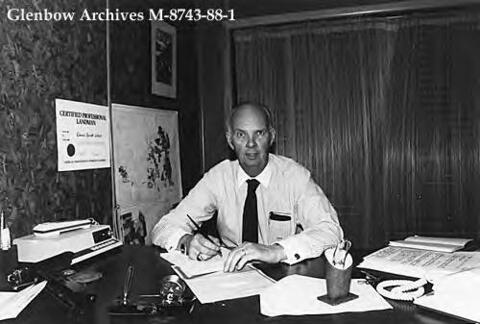 Edward Everett "Ned" Gilbert, 1922-2018, was born in Madison, Wisconsin, USA. He attended the University of Wiscsonsin and graduated in geology in 1947. Gilbert was a pioneer of the Alberta oil sands through his work in Calgary, Alberta for Sun Oil Company (Suncor), 1944-1972. He later held senior technical and management positions with Coseka Resources, 1972-1976, Ultramar and others, 1977-1982, Petro-Canada, 1982-1983, and the University of Calgary, 1985-1991. At the latter institution he played a leading role in the Petroleum Land Management program. Gilbert was also a key figure in researching of oil shales in the Canadian west. He was active as a member of the Canadian Association of Petroleum Landmen, the American Association of Petroleum Landmen, American Association of Petroleum Geologists, Canadian Society of Petroleum Geologists, and Association of Professional Engineers, Geologists and Geophysicists of Alberta. Among his honours are honorary memberships in the CSPG (1995) and AAPG (1999) and the J. C. Sproule memorial plaque of the Canadian Institute of Mining, Metallurgy and Petroleum (1999). In 2011 he was inducted into the Canadian Petroleum Hall of Fame. Aside from the petroleum industry he was active with the Calgary Jaycees, Riverview United Church, Boy Scouts, Calgary Boys and Girls Clubs, John Howard Society, United Way and Operation Eyesight. He and his wife, Evelyn "Lyn" Johnston, 1921-2017, had two children, Mervyn and Shauna (Martin), 1954-2002. For further information see the article "Ned Gilbert : The Original Landman" in The Negotiator (June 2008); and Ned Gilbert : Geologist, Landman, Oil Sands Pioneer / Edward E. Gilbert and David Finch. -- Bowen Island : Thumbprint Books Inc., 2016.

The fonds consists of reminiscences; business papers and diaries; taped interviews and research materials for his history of petroleum landmen; historical articles on Sun Oil Ltd. and Suncor; slides of Atlantic Leduc #3 well and surrounding area (1948); and files from George S. Hume and George H. Cloakey regarding the testing and development of alternative devices for petroleum exploration.