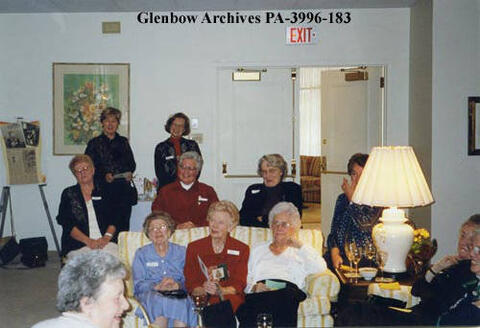 Nancy Ellen Millar, 1936- , was born in Peace River, Alberta. She attended the University of Alberta and taught at schools in Berwyn, Edmonton and Red Deer. From 1965 to 1968 Millar was the Women's Editor of the Red Deer Advocate newspaper and from 1976 to 1980 was an announcer/producer with the Canadian Broadcasting Corporation (CBC) in Calgary.

In 1980 she established Deadwood Publishing and is the author of several books on the history of the Canadian West including The Famous Five (1999), Once Upon an Outhouse (2000), The Unmentionable History of the West (2006), Once Upon a Wedding (2000), Alberta Bound (2001), The Final Word (2004), Once Upon a Tomb (1997) and Remember Me as you Pass By (1994). She wrote a series of plays, many based on the research for her publications. Millar was also a columnist for the Calgary Herald newspaper.

She was a member of the Knights of the Round Table, YWCA, Grace Hospital and the Famous 5 Foundation. She and her husband Bruce have three children, Robert, Alison and Sheila.

The fonds consists of newspaper columns written by Nancy primarily for the Calgary Herald, and research material compiled while writing her books on graveyards, the Famous Five, weddings and underwear. Includes a photograph album showing views of Calgary, Banff, and southern Alberta; and minutes and committee records related to her work with the Famous 5 Foundation.