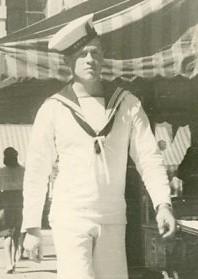 Donald Max Brown, son of Mr. & Mrs. Emery Smith, was born on August 14, 1920 in Cardston Alberta. As a young man he was employed at the Greenhill Mine of the West Canadian Collieries before enlisting in the navy and reporting for training on the H.M.C.S. Tecumseh on May 13, 1942. After finishing training he was posted to the H.M.C.S. Haida and saw considerable action in the English Channel. For five months, the ship was part of a Russian convoy ferrying arms, oil and food to Russia to the port of Murmansk. The ship was also in three major battles near Brest off the coast of France and was involved in helping clear the coastline prior to the D-Day invasion. Max Brown was aboard the Haida when it was damaged by two German destroyers in the English Channel. During the latter part of the war, Able Seaman Brown was stationed on the frigate H.M.C.S. Cape Breton destined for convoy duty in the South Pacific. After the war Brown moved to Blairmore, Alberta where he met his wife Joyce. He and his wife ran a number of successful businesses before retiring and moving to Kelowna, B.C. then later moved to Calgary, Alberta. Donald Max Brown died on April 13, 2012 in Calgary at the age of 91 years.

Records were donated to the Naval Museum of Alberta by donor and transferred to the archives in September 2016.

Fonds consists of publications, a scrapbook, newspaper clippings and documents, and a hand-written journal related to Max Brown's service as a seaman during World War II.

Related items are held by the Naval Museum of Alberta.
Donald Max Brown also donated many other items related to his naval service to the Legion in Coleman, Alberta. There is a handwritten record of these items in Series 1, File 2.

This AtoM record was created by Jason Nisenson, November 2016.