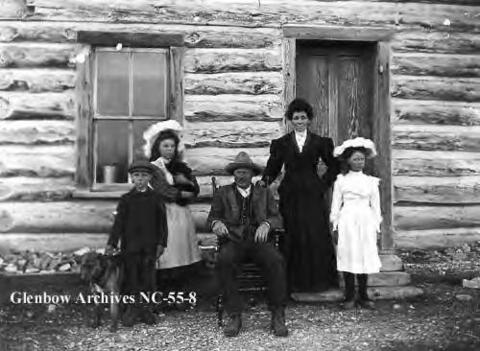 Mary Morrison, 1897-1977, was born in Cochrane, Alberta, the daughter of Donald and Jane Morrison. In 1925 she went to California, USA and worked as a nurse but returned to Calgary in 1928. After the Second World War she opened the Good Will Collection Agency but later gave it up for health reasons. She then served as a sales representative for Select Oils and later joined her brother, John, at John A. Morrison Real Estate from which she retired in 1950. She was active in many local organizations including the Colonel Russell Boyle chapter of the IODE, the Southern Alberta Pioneers' and Old Timers' Association, the Calgary Women's Liberal Club, the Catholic Women's League, the Women's Canadian Club, and the Calgary Ration Board. She also served on the auxiliaries of the Holy Cross and Colonel Belcher hospitals and received a citation for her work with the St. John Ambulance Association during the war.

The fonds consists of personal correspondence, photographs, financial and employment records, as well as various club and association pamphlets, circulars, programs and song sheets. Includes newsclippings related to Cochrane history and personalities, and a club journal of the IODE (1930-1941).