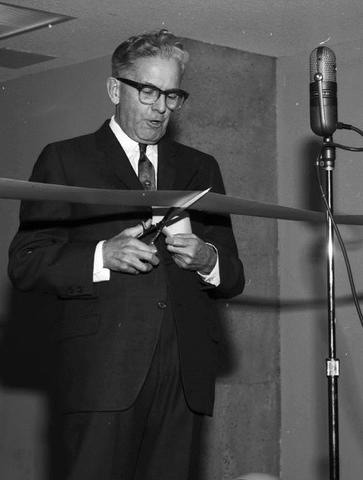 Andrew Leo Doucette, 1900-1974, was born in Yarmouth, Nova Scotia. After receiving a BSc degree in Civil Engineering from Dalhousie University and Nova Scotia Technical College ca.1917-1920, he taught in rural Alberta schools and received his teaching certificate from the Edmonton Normal School in 1923. He continued teaching in Alberta, including at the Edmonton Normal School (1929-1932, 1940) and the Calgary Normal School (1938-1940), and was Rural School Inspector at Vegreville (ca.1932-1936).

He also served in the Canadian Army from 1940-1946, attaining the rank of major.

During his years as an administrator, he worked strenuously to establish an autonomous University of Calgary. He also chaired or was a member of several education committees and conferences including the Western Canadian Conference on Teacher Education. He and his wife, Violet Thelen, had three children, Frank, Marjorie and Kay.