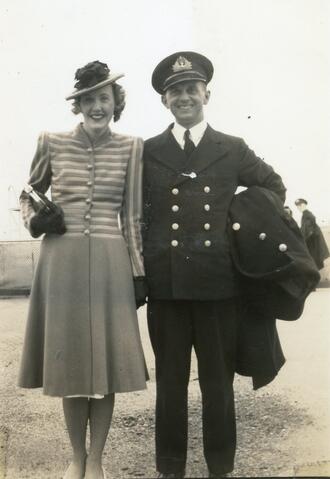 Kenneth Edward Grant was born in 1916 in Vancouver, British Columbia. Grant earned a bachelor of arts from the University of British Columbia in 1937. While there, he joined the Canadian Officer’s Training Corps and was commissioned as Second Lieutenant. After graduation he worked as a reporter for the Vancouver Sun. While there he met Gloria Pallister who worked in the advertising department and they were married in 1940. At the outbreak of WWII grant joined a reserve group in Vancouver, and eventually entered into the Royal Canadian Navy Volunteer Reserve on January 1, 1941. He began his service aboard as a Sub-Lieutenant aboard HMCS Napanee. He occupied many roles during war, including serving as a member of naval training staff, as staff officer aboard HMCS Assiniboine, as first Lieutenant for HMCS Kokanee. Grant remained with the navy after the war, working as an officer with the Sea Cadets. In 1954 he joined HMCS Algonquin as First Lieutenant. In 1955 he was stationed with Ottawa in put in charge of Atomic, Biological and Chemical Defensive Warfare (ABCD) training. In 1960 Grant was given command of HMCS ‘Cap de la Madeleine and of the 9th Escort Squadron. On November 29th 1963, returning form Halifax, Grant was killed when Trans-Canada Air Lines Flight 831 crashed just after take-off from Montreal.

Transferred from the Naval Museum of Alberta, March 2020.

Fonds consists of records attesting to the naval career and personal life of Kenneth Edward Grant. Collection highlights include: an album of original photography (rehoused) recording life aboard several WWII navy ships and a set of letters sent by Grant to his wife during his time of service both during and after the war. The fonds is divided into 4 series: