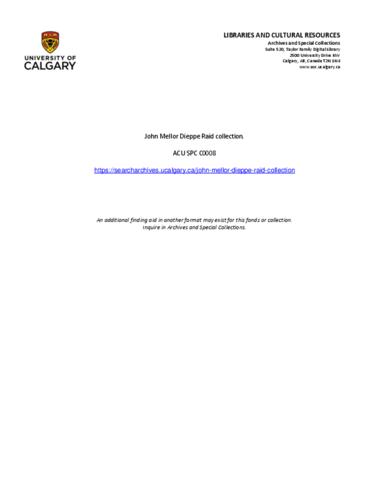 1.6 m of textual records and other material.

On August 19, 1942, a raid across the British Channel on Dieppe (Operation Jubilee) was planned to test Hitler's defences and the capability of the Western Allies to launch large-scale amphibious assaults. It was a major disaster. The raid lasted only 9 hours but among 5000 Canadian soldiers involved more than 900 were killed and 1300 taken prisoner. The failure was primarily caused by poor and overly complex planning, inadequate training, insufficient fire support and the employment of inexperienced troops. (Summary of Brereton Greenhous's entry in The Canadian Encyclopedia. - Edmonton : Hurtig, 1985)

Acquired from J. Mellor in 1977 and 1992. Transferred from Special Collections holdings to Military Museums Library and Archives holdings, October 2017.

Text in English and some text in German.

Title based on contents of the collection.