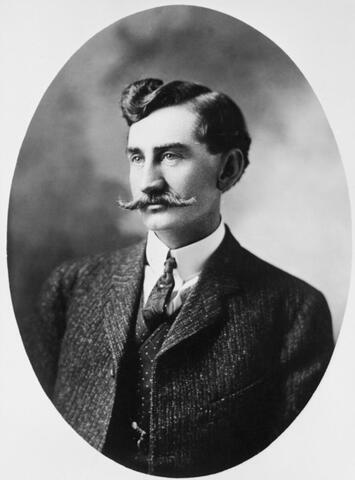 John Henry Gano, 1873-1947, was born in DeWitt County, Illinois, USA and raised in Washta, Iowa. He arrived in Vermilion, Alberta in about 1904 and opened a photo studio. In 1906 he homesteaded near Wainwright, Alberta and moved into the town to open a studio in 1909. He married Bessie Enos from Illinois in 1912, and they had three children, Elmer Fulton, Marjorie Oregonia (Williams) and Lavon Virginia (Whiteside). The photo studio in Wainwright was destroyed by fire in 1912, but it was soon rebuilt. Bessie worked in the studio hand-colouring photos. Until John sold the studio in about 1914 to move to the USA he also did contract work taking photos of Grand Trunk Pacific railway construction near Edson, Alberta and taking photos for the dominion government of homestead land improvements. He was also the official photographer for the Wainwright Board of Trade. Between 1914 and 1924 John moved his family between Alberta and the USA a number of times, and then settled in Unity, Saskatchewan to open a studio. After moving back to Wainwright in 1931 and living in Calgary for a short time the Ganos settled in Red Deer, Alberta in 1941. John remained active in photography until his death, and Elmer worked in the studio in the 1930s and 1940s. For further information see "J. H. Gano, Pioneer Photographer" in Alberta History, vol. 28, no. 2 (Spring 1980), p. 20-27.

The fonds consists of photographs of Wainwright and homesteading in the area; Grand Trunk Pacific Railway construction near Wainwright (1909); National Buffalo Park and wildlife including buffalo and cattalo (ca. 1911); Vermilion (1906); and John and one of his studios (nd).