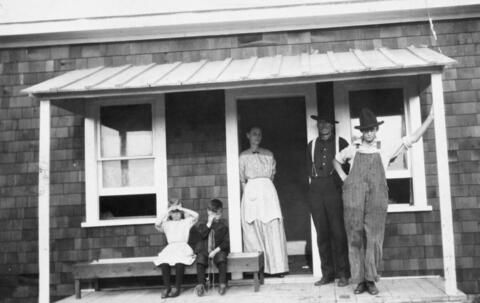 Joseph H. Brown, [ca. 1870s-1950s], was a tool dresser and oil well driller, who settled with his family in Geneva, Indiana, USA about 1900. From 1914 to 1915 the family lived in the Turner Valley area of Alberta, and Joe was head driller on Calgary Petroleum Products No. 1 well, better known as Dingman No. 1. He also drilled at Bow Island, Alberta. He subsequently drilled in California, 1916-1917, and Alaska, 1918-1919. He continued in the drilling business until his retirement. He and his wife had five children, Robert E. Lee, Josephine, Lola, Nora and Charles. Robert, 1909- , became a successful leather carver in Hollywood, California.

The fonds consists of photographs of Turner Valley and Bow Island wells, the Brown family, Turner Valley friends, and Bob as a leather carver.

There is an interview with Robert E. Lee Brown about his father and his own life in the Turner Valley Oilfield Society Oral History Project at Glenbow (RCT-881-36).

There is not yet a location number for the TVOSOHP. See Doug.