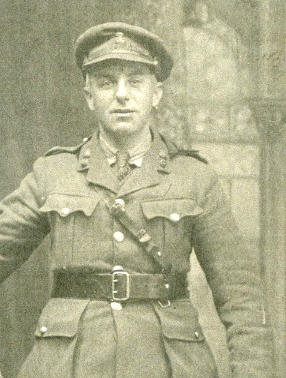 Ithel Davies was born in Portmadog, Wales on October 30, 1885. Prior to the outbreak of World War One, Davies worked in the family business, Davies Brothers Slate Merchants. During the war, Davies served in various units of the British Expeditionary Force including the 87th Field Ambulance and the 1st Field Survey Company Royal Engineers. Davies began the war as a private and was steadily promoted; he achieved the rank of Lieutenant in the summer of 1918. Following the war Davies returned to Portmadog and the family slate business. He had four children. Ithel Davies died on January 20, 1976.

The original diaries of Ithel Davies, on which these transcriptions are based, were kept by Davies's eldest son. The extended family only became aware of the diaries' existence following the death of the eldest son. The originals are in the custody of the donor's niece in London, UK.

Fonds consists of a three volume transcript of an original diary by Ithel Davies. The diary describes his experiences during World War One as a service member of the British Expeditionary Forces and is notable for its intimate account of the Gallipoli Campaign and the Battle of the Somme. Diary transcriptions have been bound and supplemented by the donor with maps, photocopied photographs, and relevant transcribed correspondence.

This AtoM record was created by Jason Nisenson, April 2016.