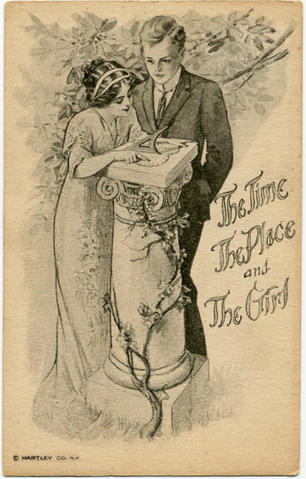 Helen E. Taylor, aka Hellen and Nellie (a common nickname for Helen in the 19th and early 20th century), was born in June 1881. Prior to, and during WW I, she worked as a cashier at Leonard’s Café in Calgary, which she also used as an alternate mailing address.

The postcards were found among the belongings of the donor’s late mother and had originally been retrieved from a cottage about to be dismantled next door to her parents’ home in Poulsbo, Washington sometime in the 1970s.

The collection consists of 53 postcards, 1 greeting card and 1 photograph : b&w she received from five different soldiers prior to, during the course of and following WW I. The names of the soldiers in alphabetical order with the number and type of item received is as follows:
Arthur A. Botsford: Christmas Greeting Card from Moore
Barracks, Shorncliffe, Kent, England (undated).
"Hislop": Postcard (dated “3-5-19”).
Thomas E. Randall: 11 postcards and 1 photograph (dated 1915-16). The photograph is a unit photograph of Randall’s Machine Gun Section and all members of the unit are identified on the reverse.
"Royal": 10 postcards, most expressing considerable affection and suggestive of a romantic interest, if not relationship (dated (1913-14).
Undetermined: Authorship of 2 postcards not determinable.
Will 5 postcards. These appear to be part of what was originally a series of six consecutive cards with one missing (undated).

The remainder of the postcards have not been written on. The pictures on the post cards’ front sides are a wide variety of subjects mostly scenic, but several which are military related and a few cartoons. One of the postcards is actually a postcard-sized
advertising card for a sheet metal and furnace/boiler company.

This AtoM record was created by Jason Nisenson, September 2015.