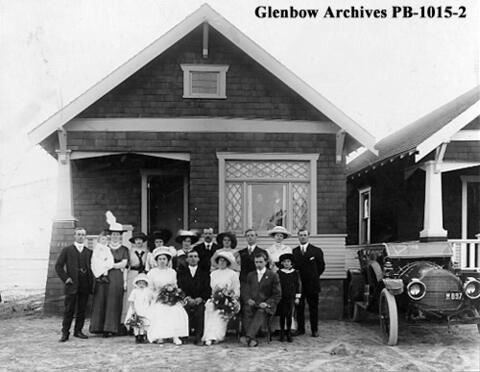 Brothers Louis and Robert Wade, and Albert and Frederick Wright were all born in England and moved to Calgary just before the First World War. Together they purchased the entire side of a city block on 20th Avenue NE and between 1911 and 1913 built four nearly identical cottages on four of the lots. Albert Victor Wright, ca. 1883-1971 and Frederick George Wright, 1879-1957, were from St. Helen's, Lancashire. Both were trained as carpenters. Before immigrating Frederick served in the Lancashire Fusiliers. He joined the Canadian Pacific Railway. Albert married Edith, ca. 1883-1977, and Frederick married Mary "Molly" "Mollie" McCaul, 1878-1947, who was born in Ireland. The latter had two children, Frederick George Wright Jr., 1912-1995, and Kathleen Mary Cecilia "Susie", 1918-2013. Harry Wright, brother of Albert and Fred, also built a home on one of the lots and worked for Star Printing Works until he moved to Oakland, Calfornia about 1920. A fourth brother, George, joined the family in Calgary but died in the influenza epidemic of 1918. Frederick Wright Jr. attended St. Mary's School and the University of Toronto and worked for the Canadian Pacific Railway in Calgary and Lethbridge as a signaller. He served in the Second World War. He and his wife Marjorie Southby Cochrane, 1913-2004, had one son, Frederick Michael Wright, 1951-. Kathleen Wright was educated at St. Mary's Girls School, and convent schools in Rockyford (St. Rita's) and Red Deer (St. Joseph's). She received her ARCT and taught music in Calgary for many years. She later received education and music degrees and taught in local schools and in several southern Alberta centres. She was active in Catholic organizations and was organist for several congregations.