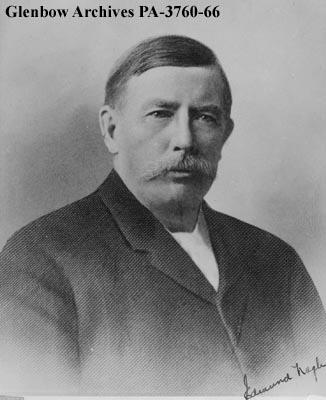 Edmund Barry "Ed" Nagle, 1853-1929, was born in St. Hyacinthe, Quebec and educated at St Laurence College. He was involved in farming and milling in his home province, but in the 1880s he moved to Manitoba and then Edmonton, Alberta. In 1887 he joined James Hislop to develop the Hislop and Nagle fur trading company along the Athabasca River and Mackenzie River. At its height the Hislop and Nagle Company operated 14 permanent fur trade posts and ran a freighting operation with three steamboats in competition with the Hudson's Bay Company from headquarters at Fort Resolution and Fort Rae, Northwest Territories.

Ed married Eva Klapstein in 1895 and they had five children, Eva Geraldine, Edmund Harry, Sarsfield Burke, Theresa Margaret and Louise. In 1911 he sold the firm to the Northern Trading Company and retired to Penticton, British Columbia. His son, Edmund Harry "Ted" Nagle, 1898-1989, was born in Hay River, NWT, and raised in Edmonton and Penticton, British Columbia. He spent five years prospecting throughout the north for the Consolidated Mining and Smelting Company, after which he was appointed Foreman Underground for the Sullivan Mines in Kimberley.