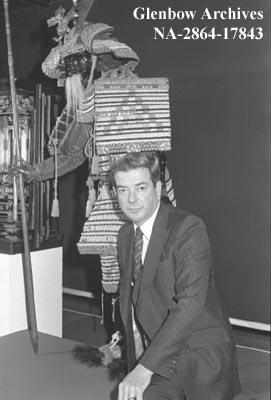 Duncan Ferguson Cameron, 1930-2006, was born and raised in Toronto. He worked as a lumberjack, wilderness guide and newspaper reporter for the Toronto Telegram before beginning his museum career at the Royal Ontario Museum in 1956. From 1962 to 1971 he was president of Janus Museum Consultants Ltd., during which time he was the chief of planning for the Ontario Science Centre and a curatorial consultant for Expo '67. He was director of the Brooklyn Museum in New York City, 1971-1973, and on his return to Canada in 1975 joined P.S. Ross and Partners as a cultural resources specialist. He became director of the Glenbow-Alberta Institute in 1977 and held this position until his retirement in 1988. In 1983 he became the first Canadian president of the Commonwealth Association of Museums, and served in this position until 1989. In 1985 he received the Canadian Museum's Association Award of Merit, and in 1992 was made a Fellow of the CMA. In 1995 he spent a year in New Zealand, teaching graduate students at Massey University. In 2005 he received the Lieutenant-Governor's Award from the Alberta Museum's Association in recognition of his museum work. He and his first wife Martha had two children, Seana and David. He married journalist Nancy Tousley in 1975.