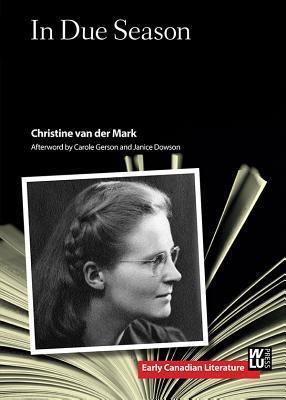 4.54 m of textual records and other material.

Born in Calgary, Alberta, Christine van der Mark attended Normal School and spent five years teaching in rural Alberta schools. She then completed a B.A. and M.A. at the University of Alberta, studying creative writing under F.M. Salter; in 1946 she submitted her first novel, In Due Season, as her thesis.

In Due Season (1947), which explores the human costs of pioneering in northern Alberta through the 1930s, went on to win the Oxford-Crowell prize for Canadian fiction.

During three years of writing and teaching at the university, she married, and from 1953 to 1964 her husband's work led the family to Montreal, Pakistan, the USA, England, and the Sudan, before they settled in Ottawa. Throughout her many travels, van der Mark continued writing stories, articles, and a short novel with a Pakistani setting, Hassan (1960).

The novel was completed in Ottawa and followed by three unpublished works: Where the Long River Flows, a Novel of the Mackenzie; Paul Goss, about a rural teacher in remote northern Alberta; and No Longer Bound, an autobiographical piece.

See ‘Afterword’ by van der Mark's daughter, Dorothy Wise, in the 1966 reprint of In Due Season.

The spelling of van der Mark varies over time and between family members.

All accessions were intellectually combined in 2021.