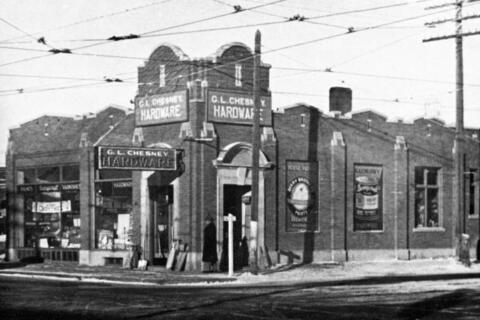 George Chesney, ca. 1879-1957, was born in England, later moving to Seaforth, Ontario where he married Edna Pickard. In 1912 he came to Calgary, Alberta and established Chesney Hardware. A son, Arthur, entered the business in 1931 and another son, Doug, in 1945. The business gradually expanded at a location on 16th Avenue N. Art retired in 1970 and Doug in 1973. In 1980 William Graham and Al Sylvester became joint owners and the location was moved to 224-41st Avenue NE. For further information see "George L. Chesney Hardware" in A Business History of Alberta / Henry C. Klassen. - Calgary : University of Calgary Press, 1999, p. 100-102.

The fonds consists of catalogues, price lists, and photographs of stores.