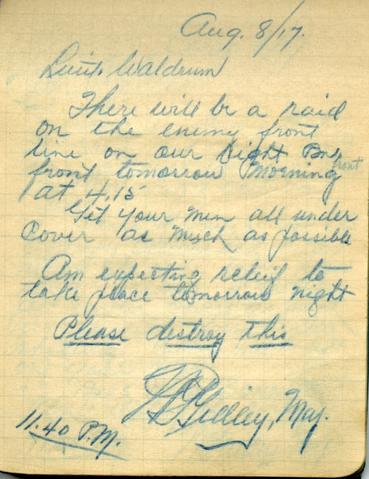 Charles Arnold Henderson was born in Northumberland, England on November 10, 1890. After emigration to Canada Henderson settled in Leamington, Ontario and found work as a fireman. During WWI he enlisted with the Canadian Expeditionary Force, 99th Battalion. Following the war Henderson returned to Leamington and worked in a medical laboratory. He married and had two sons. Henderson died in 1980.

William George Gidley was born in Devonshire, England on November 20th, 1870. Gidley enlisted with the Canadian Expeditionary Force during WWI, with the 99th Battalion and later served as an officer with the 19th Battalion, where he commanded B Company. Gidley earned the Military Cross in November 1916 for "conspicuous gallantry in action. He survived the war and returned to Leamington, Ontario.

Materials were originally gathered and created by Gidley. Following the war they were kept by Henderson.

This AtoM record was created by Jason Nisenson, April 2016.