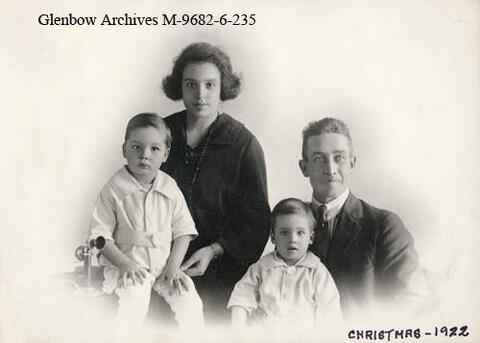 12.5 cm of photographs and other material

Olive Ellen Burley, 1898-1982, was born in Leicester, England, the daughter of Albert Burley and Ellen Moore Burley, ?-1941. The family moved to Calgary, Alberta in 1907, where her father worked for Great West Saddlery. Olive attended McDougall School and Garbutt Business College, and then in 1918 married Peter Bertram. Peter, 1889-1979, was born in Aberdeen, Scotland and came to Calgary in 1910. He was well known in the building trade. The Bertrams had two sons, Allan Bertram, 1919-?, and George Robert Bertram, 1920-1986. The family lived at 1839 Bowness Road, moving there in about 1924. Olive continued to live there until 1972. George Bertram, 1920-1986, attended Western Canada High School and Calgary Technical High School. He was a runner and as a teenager participated in the YMCA Boys’ Fair and School Exhibitions. He later worked for the Northwest Mortgage Company. He and his wife, Margaret Green, had four sons, including Ronald Bertram.

The fonds consists of family photograph albums, loose photos and memorabilia, primarily compiled by Olive Bertram. The photographs document the Burley and Bertram family homes, Salvation Army members including her sister Florence, Sarcee Army Camp and men in uniforms during the First World War, camping trips to the Rocky Mountains in the 1920s, Allan and George as children, the Ford car, and various family members. Includes George’s prize ribbons for running and school exhibition entries for his woodworking.