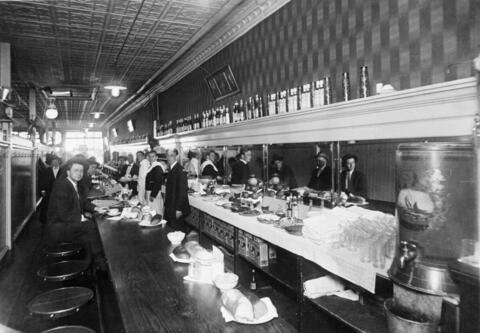 Roy H. Beavers, 1885-1968, born in Kansas, USA, worked the carnival circuit from 1903-1908. In 1909 he married Evelyn "Lina" Gertrude Shirley, ?-1973. They emigrated to Calgary in 1911 and opened the Club Cafe the same year. By 1929 they and an associate, Reuben Ward, had formed Restaurants Limited which consisted of seven restaurants and a bakery. Roy and Evelyn had three sons, Albert Edwin, 1912-2000, Gordon Henry, 1915-1973, and Jack L. ca. 1923-. Gordon and Albert joined the family business. In 1942 the Club Cafe was sold, and in 1948 the Beavers took on catering for the Calgary Exhibition and Stampede Board. Later they also ran a catering service. The family business was sold after Roy's death. Roy was a moving force behind the Calgary Booster Club and the Calgary Stampeder Football Club. He was associate director of the Calgary Exhibition and Stampede and a member of the Al Azhar Temple, as well as many other organizations. Evelyn was involved with the American Woman's Club of Calgary, and Albert went to the Alberta Boys' Parliament as a child.