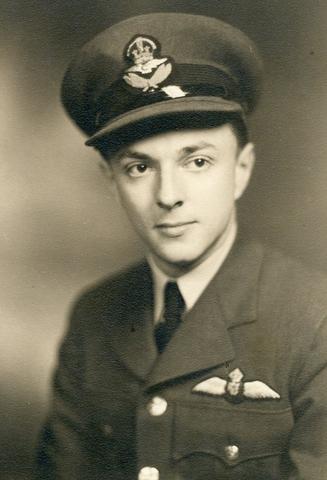 Angus McKay Lott was born in 1919 in Sarnia, Ontario. He received his education at Victoria College in the University of Toronto. He enlisted in the Royal Canadian Air Force on November 24, 1941 at the age of 22. He trained at No. 5, ITS, graduating from the program on May 23, 1942, at No. 13 Eastern Ontario Flying School, graduating on September 11, 1942. He achieved the highest standing in Ground School and was awarded a trophy by the school. He then enrolled No. 2 SFTS (Service Flying Training School) graduating on January 22, 1943. He was commissioned as a Flight Lieutenant in No. 541 Squadron of the RCAF in 1943. During his time overseas, he undertook a large number of sorties as a photographic reconnaissance pilot. In August 1944, he photographed the port of Le Havre from a low level and in September 1944 he photographed the bridge at Nijmegen from an altitude of fifty feet. He also secured excellent low level photographs of the breakers in the sea wall at Walcheren in October 1944. He was awarded the Distinguished Flying Cross on April 17, 1945. After the war, he returned to Sarnia where he worked as an accountant. He was a member of the Canadian Officer's Training Corps (COTC).

Fonds consists of material related to the wartime experiences of Angus Lott, from the time of his training through to the period just following the end of WWII. This fonds is notable for its large, well captioned set of aerial photography taken by Lott's crews during the final years of the war. Photographs in this sub-series show the condition of numerous key cities and rural locations in Europe and are well explained by Lott's careful captions. Fonds is divided into three series:

Three photo albums in this fonds have been left as they were arranged, presumably, by Lott.