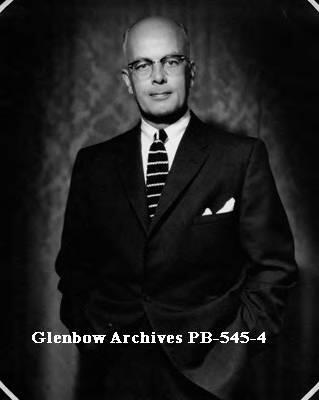 Alexander Graham Bailey, 1909-1980, was born in Ottawa, Ontario and trained as an engineer at McGill University. He began his oil career in 1944 as vice-chairman of the Alberta Petroleum and Natural Gas Conservation Board. In 1948 he became exploration manager for Husky Oil and a year later formed his own company, A.G. Bailey Ltd. It later amalgamated with Selburn Oil and Gas to form Bailey-Selburn Oil and Gas Company Ltd. He subsequently formed Penwa Oils Ltd. and Selby Acreage Ltd. He was a founder and first president of the Independent Petroleum Association of Canada. From 1958 to 1965 he was president of Alberta Gas Trunk Lines (now NOVA). Bailey received an honorary doctorate from the University of Calgary in 1977. He and his wife, Amy, had two children, Ward and Penelope (Lothian).

The fonds consists of personal papers: appointments, certificates, correspondence, photographs and scrapbook regarding personal and business activities (1929-1977); and prospectuses, minutes, financial statements and ledgers for his companies (1949-1971).