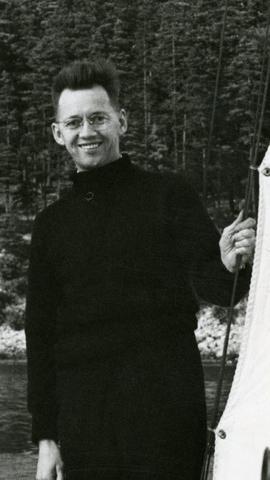 Albert Frederick Tigerstedt, 1906-1989, was born in Finland of Swedish ancestry, and in 1907 emigrated with his family to a Finnish-speaking community near Eckville, Alberta. In 1918 his family settled in Calgary. He left school at a young age, worked at odd jobs, and learned the trade of photography through independent study and an informal apprenticeship with Calgary Herald photographer W.J. Oliver. In 1932 he established his own studio on Centre Street North. He married E. Jean Tigerstedt, 1917-1997, in 1941 and she became a partner in the business. Born in Calgary, Jean graduated from normal school in 1937, and taught briefly at Oyen, Alberta. . The Tigerstedts specialized in portraiture and industrial photography. Albert described himself as a “bread and butter photographer, not an artist”. The Tigerstedts sold the business to Pearson Royce in 1987. During World War II, Albert served in the Royal Canadian Navy from 1943 – 1945 as head of a naval photography unit. Albert Tigerstedt died in Calgary in the fall of 1989.

Donated by the Naval Museum of Alberta Society, 2013.

Tigerstedt Studio Fonds at the Glenbow Museum and Archives

This AtoM record was created by Jason Nisenson, June 2016.