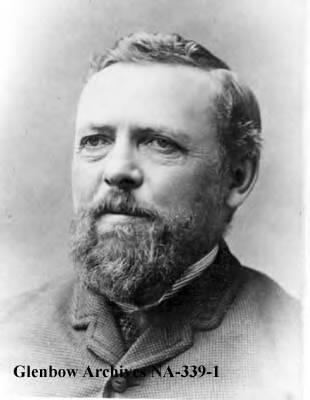 William Pearce, 1848-1930, was born in Ontario and studied civil engineering at the University of Toronto. He was engaged on various surveys until 1874 when he began a 30-year career with the Canadian Department of the Interior. He was in charge of surveying meridians and parallels in Manitoba and the North-West Territories, 1874-1881. In 1882 he was appointed Inspector of Agencies on the Dominion Lands Board, and was in charge of investigating all land claims (mostly Metis) from the Red River to the Rockies. From 1898 to 1901 he was involved with the adjustment of railway land grants, and from 1901 to 1904 was Chief Inspector of Surveys. He joined the Canadian Pacific Railway (CPR) in 1904 and became the major proponent of the company's irrigation schemes in Alberta and Saskatchewan. He retired from the CPR in 1926.

Gifts of Harry, Frances and William Pearce, Peter Tassie, Muriel Tassie and E.P. Scarlett, 1958-2015; and transferred from the Riveredge Foundation, 1979.

The fonds consists of William's correspondence, building plans, and financial statements related to the funding and construction of the Calgary General Hospital (1890-1903); his articles on the Riel Rebellion, National Parks, irrigation, CPR, and oil; report to the Economic and Development Commission on development of the West (1916); a genealogy of the Pearce family; architectural plans for the Pearce home (1888); survey plan of proposed irrigation ditch (1896); and various family certificates, invitations, programs, newsclippings and photographs of the family and the west. Includes Harry Pearce's will and collected articles about his father, as well as seven original watercolour Christmas cards (1895-1901) sent to him by his father.

Other Pearce records are held by the University of Alberta Archives and the Saskatchewan Archives Board. A microfilm of the SAB material is available at Glenbow.

The NA's are virtually all copy negs.

AC Pearce is a copy of SAB material.