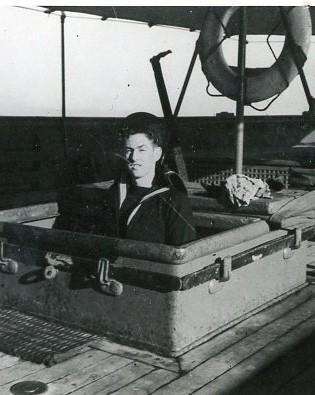 William (Bill) J. Chalk, V11567, Royal Canadian Naval Volunteer Reserve, originally from Saskatoon, served in the RCNVR from 9 December, 1940 to 9 November, 1945. He enlisted in Saskatoon, and served on the following ships and training facilities: HMCS Naden, HMCS Malaspina, HMCS Caraquet, HMCS Stadacona, HMCS Cape Breton, HMCS Peregrine, HMCS Niobe, HMCS Cornwallis, HMCS Unicorn. On the Malaspina, he spent 1941 off the coast of British Columbia. In 1942-3, he served on the Caraquet whose activities focused on mine sweeping. While serving on the Cape Breton on loan to the Royal Navy, he was on operational duties in the North Atlantic from the Bay of Biscay to Murmansk, Russia and in the English Channel for the period from “D” Day in 1944 to September 25, 1944. Their task was to prevent the German submarines from escaping from the Bering Sea into the Atlantic.

Unclear what the relationship of the original donor, Sylvia Scott, to NMA is/was. Material was donated along with many related artifacts in December 2018.

Transferred from the Naval Museum of Alberta, February 2019.

Consists of materials related to the RCNVR career of William Chalk during WWII. Fonds is divided into two series: