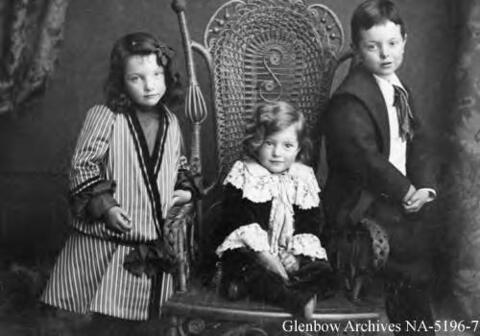 In 1885, William Berry, ?-1901, and his wife Emma Rachel Barfoot, left Chatham, Ontario, and settled in Chipman Creek, Alberta, where their sons, Sam, 1862-?, and George Thomas, 1865-1937, had set up a homestead in 1884. The family established a cattle ranch and dairy and later a hardware store called William Berry and Sons Hardware. In 1893 George married Ada Ann Gill, 1874-1934. The couple homesteaded near Yarrow Creek where George also was postmaster from 1895 to 1899. They had three children, Herbert George, 1894-1917, Ada Gladys, 1896-mid 1960s, and Hugh Wallace, 1898-?. The Chipman Creek ranch was sold in 1899, and the hardware store in 1901. George and his family moved to Victoria and then placed the children in Toronto boarding schools and travelled for a number of years. In 1911 they returned to Alberta and established the Strathmore Hardware Co., selling it in 1921 and moving to a farm near Strathmore. Ada was involved with the Strathmore Sorosis Society and George was on the town council. Herbert attended Upper Canada College and university in Detroit, Michigan, USA and Toronto. He died serving with an ambulance corps at Ypres-Passchendaele during First World War. Ada Gladys attended Havergale Ladies College and married Captain Philip Harold Morgan, a Canadian Pacific Railway (CPR) engineer, in 1919. Herbert William, 1921-?, was their only child. The couple divorced in 1925 and A. Gladys and H. William remained in Strathmore. Hugh attended Upper Canada College and the University of Idaho. He returned to the Strathmore farm in 1921. He was active in the Progressive Conservative Party of Alberta, the Gleichen Conservative Constituency Association, the Oat Huller Coop, and the Wheatland Weather Modification Association. He also invested in gold mines including the Chinook Yellowknife Gold Syndicate.