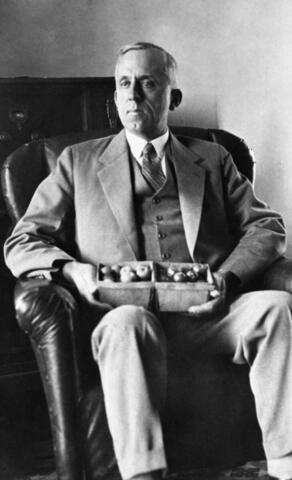 William Donald Albright, 1881-1946, born in South Cayuga, Ontario, attended Ontario Agricultural College and worked for a number of agricultural newspapers. He married Eva Belle Lossing of Oxford County, Ontario in 1908, and in 1913, the couple moved to the Peace River area of Alberta and homesteaded near Beaverlodge. Albright offered to make the farm a site for seed experiments in 1914, and in 1917, the government rented twenty acres of the land and placed him on part-time salary. He became a Superintendent in 1919. The entire farm became an experimental substation in 1940 and a station in 1941. The Beaverlodge Station made an outstanding contribution to the development of agriculture and homesteading in Peace River territory. The Albrights also devoted spare time to gathering historical interviews from the area. Albright was active in the Beaverlodge School Board, the local War Finance Committee, the West District Hospital Association, the Board of Trade, and the Monkman Pass Highway Association. The couple had three children: Florence Eileen ( Ross), Frederick Bruce, and Robert Gordon, ?-1997. In 1954 the Historic Sites and Monuments Board of Canada designated Albright as a National Historic Person. For further information see Feasting on Misfortune : Journeys of the Human Spirit in Alberta's Past / David C. Jones. -- Edmonton : University of Alberta Press, 1998; and David C. Jones' article "What One may Accomplish - the Case of Donald Albright, Apostle of the Peace River Country" in Annual Distinguished and Anniversary lectures, volume II (1994) / edited by F. D. Oliva and D. R. McGraw. -- Calgary : Faculty of Education, University of Calgary, 1994, p. 32-55.

A short memoir by Albright contained in the fonds was published as "Recollections of an Experimentalist" in Alberta History, vol.63, no.1 (Winter 2015), p. 20-24.