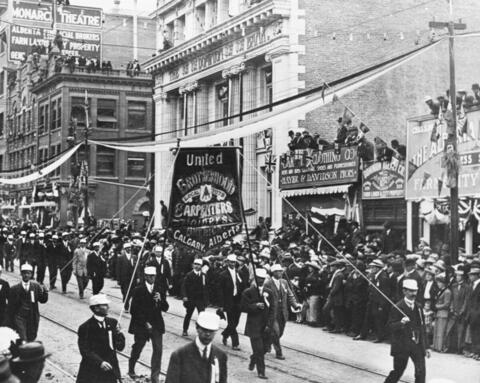 The United Brotherhood of Carpenters and Joiners of America was established in the USA in 1881 and adopted its present name in 1888. Local 1779 was chartered by the UBCJ and organized in 1904 to serve carpenters in Calgary. The objectives of the UBCJ are to increase membership within its trade jurisdiction, maintain job security, increase wages, improve work hours as well as conditions, and to maintain high trade standards through apprenticeship training. In later years the local provided its members with health and welfare benefits and instituted a Ladies Auxiliary Club to sponsor and organize social events.

By 1952, Local 1779 was the largest single union local in Alberta and between 1951 and 1952 its staff was enlarged and reorganized to maintain the office and increase membership. Its membership reached 1,300 in 1954. In the same year the local became affiliated with the District Council of Carpenters, which also incorporated Local 2508 (Millworkers), Local 2103 (Carpenters) and Local 2560 (Floorlayers). Local 1779 merged with Local 2103 in 1985.

A portion of the records were received by the University of Calgary Library in 1977 and were transferred to the Glenbow Archives in 1985.

Gifts of the United Brotherhood of Carpenters and Joiners, Local 1779 and the University of Calgary Library, 1985.

The fonds consists of minutes, ledgers, and correspondence.