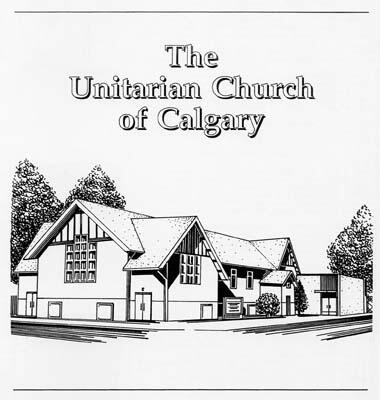 The First Unitarian Church of Calgary, in Calgary, Alberta, was formed in 1909. With financial support from its British and American denominational organizations, it soon constructed a church building, known as Unity Hall, at 917 - 14 Avenue SW. Its ministers were Rev. Frank Wright Pratt, Rev. Lief Huseby, and Rev. William Irvine. After Irvine turned to a career in politics, the congregation rapidly declined and ceased to exist in 1920 or 1921. An effort to revive the Unitarian religious movement, the Unitarian Fellowship of Calgary, was organized in 1951. It became dormant in 1953, but was again revived in 1956.

By 1960 the congregation had become large enough to be renamed the Unitarian Church of Calgary. It met in rented halls until 1968 when it purchased an existing church building at 1704 - 1 Street NW. Since 1961 the church has been served by Rev. Dwight Brown, Rev. Jerome Howell, Rev. Violet Kochendoerfer, Rev. Jack Loadman, Rev. Rod Brown, and Rev. Meg Roberts. The church is known for its free-thinking atmosphere which celebrates diversity of beliefs. At times, it has been actively involved in social and political issues.

Gift of Unitarian Church of Calgary, 1986-

The fonds reflects the activities of the Fellowship and Church since 1956, but also includes some collected historical files on the First Unitarian Church of Calgary and its ministers. Includes incorporation documents; constitution and bylaws; minutes of congregational meetings, the Board, and committees; files about ministers and members; membership records; financial records; orders of service; newsletters; sermons; scrapbooks; files on the sanctuary of refugee claimant Mauricio Romero (1993-1994).

Membership directories and member biographies are restricted for 50 years, except to members and employees of the Church and their direct descendants.

Some of the material is also available on microfilm.

The 1991 addition was not separately accessioned.